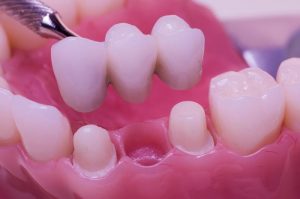 Bridges are an option to replace a missing tooth. They require healthy teeth on either side of the missing tooth. Those teeth on both sides are prepared like they will receive a crown. Then three crowns fused together are cemented in place on those two teeth, suspending the replacement tooth between them. A very common treatment that still has excellent uses, but has become less popular in favor of a dental implant.

The negatives of a bridge are that they require the teeth on both sides to be prepared for a crown, and two teeth are supporting the chewing forces of three teeth. They can be used to replace more than one tooth at times, and also tend to be cheaper than dental implants. One of the biggest factors when choosing a bridge is that they are fairly immediate. The steps are similar to a crown. Appointment number 1 is preparing the tooth, making an impression to send to the lab to manufacture your custom bridge, and you leave with a temporary bridge to try out. 2-3 weeks later, your final bridge is placed.