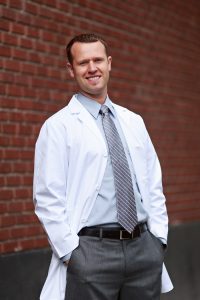 Michael Bliss was born and raised in Crescent City, California, a small coastal town about 20 minutes from the Oregon border.  His father ran the local hardware store and his grandfather was a cattle rancher. He enjoyed surfing, hiking in the redwoods and swimming in the river.

Michael attended Milo Adventist Academy (a Christian boarding school) in southern Oregon where he met his high school sweetheart, Melinda. They followed each other around for college starting with a year in Canada and ending up at Oregon Institute of Technology where Michael graduated with a Bachelors of Science in Health Sciences on the same weekend as his wedding! Two weeks later, Michael and Melinda moved to Los Angeles, California where Melinda did her externship at Cedar Sinai Medical Center where she graduated with a Bachelors of Science in Vascular Ultrasound.  Shortly after her graduation, they moved back “home” and spent the next 4 years in Portland while Michael attended Oregon Health and Science University. After graduating from dental school, they moved to Eugene where Michael worked for Advantage Dental. Two years later, Michael was asked to open a new practice for Advantage Dental in Corvallis.

Michael and Melinda moved with their cat Heffer to Silverton in August 2013 to take over Dr. Craig Ellison’s practice. Thanks to Dr. Ellison, his wife Noni and the amazing staff, the transition was seamless.

Michael and Melinda enjoy many outdoor activities like snowshoeing, wakeboarding, 4-wheeling, camping and hiking. They like to cheer on the Portland Trail Blazers when they can. Michael enjoys woodworking and welding projects that are often inspired by Melinda’s Pinterest account. They have kept busy on home improvement projects since purchasing their first home last summer.